Editor’s note: Scott Murphy, professor of music theory at the University of Kansas School of Music, is an expert on film scoring. He has written many articles in scholarly journals, including “A Pop-Music Progression in Recent Popular Movies and Movie Trailers” in Music, Sound and the Moving Image (October 2014) and “Scoring Loss in Some Recent Popular Film and Television” in Music Theory Spectrum (Fall 2014). His book chapters include “Transformational Theory and the Analysis of Film Music” In The Oxford Handbook of Film Music Studies, edited by David Neumeyer (Oxford University Press, 2013), and “An Audiovisual Foreshadowing in Psycho” In “Terror Tracks: Music, Sound, and Horror Cinema,” edited by Philip Hayward (Equinox Publishing, 2006). He answered the following questions about the 2017 Academy Award nominees for Best Original Score. The Oscars will be presented Feb. 26.

Q: Which of the nominees do you find to have the greatest artistic merit?

A: Of the five nominees, Mica Levi’s score for “Jackie” and Thomas Newman’s score for “Passengers” stand out as the two main contenders.

Q: What about the others?

A: To be sure, Nicholas Britell’s music for “Moonlight” is powerfully intimate, literally: The microphones are so close to the stringed instruments that you can’t help but hear the rosin in the bowing. However, with regard to the sheer quantity of artistry, there’s not a bounty of notes in this score, undoubtedly making room for the powerful current of popular songs that flows through the film. Dustin O’Halloran’s nominated music for “Lion,” like his wistful music for Amazon Prime’s “Transparent," succeeds with a less-is-more approach. However, its main theme, whose ideas spill over into other tracks, exudes a kind of simplicity that, to my ears, does not optimize what less-is-more can become. Both Britell’s and O’Halloran’s scores display a knowledge of the brash and bizarre sounds that 20th-century modernism wrenched out of stringed instruments, although both of these demonstrations feel more like an array of exhibits rather than unified music.

Q: A lot of folks are predicting that the musical “La La Land” will win. What’s your opinion of it?

A: The fact that there’s nothing really modern in Justin Hurwitz’s music for “La La Land” does not stand on its own as a critique: Channeling the music of Tin Pan Alley, classic Hollywood musicals and golden-era popular ballads can deliver an infectious, timeless charm. However, the chord changes, the orchestration, the melodic writing: All of it synthesizes into what sounds like an earnest, and at times impressive, university student thesis.

Q: What makes the score to “Jackie” stand out for you? 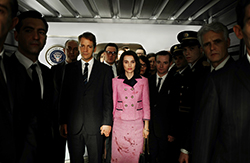 A: Mica Levi’s score for “Jackie” is wonderfully fresh compared to standard Hollywood fare, but it remains approachable. It is an anti-score: not because it sounds completely unlike a film score, but because it sounds at once like a film score and unlike a film score. It has taken film music’s conventions — sweet-sounding harmonies played by orchestral strings — and rearranged them at the molecular level. As a case study, consider Track 13 ("The End”), which underscores a scene near the film’s conclusion when Jackie confides in a priest how worthless she feels her life has become. The priest tells her “there comes a time in man’s search for meaning, when one realizes — there are no answers,” and yet we go on nonetheless. The music uses the same set of chords that one might find in a blockbuster’s main theme, but Levi strings them together in such a way that the music feels as if it is groping its way through the dark, taking small, tentative steps but without direction or purpose. In fact, this meandering can be visualized. Five years ago, Yale University professor Richard Cohn published “Audacious Euphony,” a book that offers a variety of musical maps upon which listeners can chart their experiences of harmony and melody. One of these maps perfectly suits itself to Levi’s wayward progression for Jackie, showing her fitful movements that sidestep those chords that would tap into conventional musical forces that, for example, Hurwitz’s music for “La La Land” takes for granted.

Q: “Passengers” was a box-office flop. Why do you like the score so much? 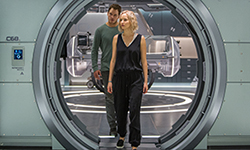 A: Thomas Newman is long overdue for an Oscar. He has been nominated 13 times for the Academy Award for Best Score, the most of any composer who has not yet won the award, including four nominations just in the past five years. Newman is ready for his "Susan Lucci moment,” in reference to the soap opera actress who finally won an Emmy in 1999 after being nominated and passed over 18 times before. From “The Shawshank Redemption” and “American Beauty” to “Wall-E” and “Skyfall,” Newman has shown himself time and time again as both an exquisite craftsman and a composer’s composer, writing attractive music that still rouses the sophisticated ear. The script’s requirement for a balance of gloss and substance may have kept Newman from bringing forth his full dramatic powers in “Passengers,” but his signature attention to the smallest details still comes through. For example, on first hearing, the film’s main title music might come across as a wasteland of ambience dotted with wisps of colorful melodic fragments before a sudden swell about three-fourths of the way through. However, something this simple feels more unsettling than it ought to be. Listen closer and one finds out why. At the outset, a tight figure of three notes repeats over and over again. With each repetition, it fades into sonic wallpaper, demanding less and less of our attention. It is the inconspicuous ground above which conspicuous figures are anticipated to appear, like the three-note repeating pattern that begins Beethoven’s famous “Moonlight” sonata. However, unlike Beethoven, Newman expands the three-note loop to a four-note loop around 15 seconds into the music, then expands further to a five-note loop, then to a six-note loop, and so on, incrementally all the way up to 12 before the late swell. Although the moment of each expansion is imperceptible, the effect is undeniable: One cannot become comfortable in the ambient groove, one cannot take for granted a constant marking of time. One cannot even take for granted a constant expansion: Twice, the process reverses from six-note groups to five-note groups before pressing on, and once later the process reverses from 10-note groups to nine-note groups before resuming the expanding course. These three “setbacks” in what is otherwise an inexorable process foreshadows the three “malfunctions” in the Starship Avalon’s journey but also generally contribute to a subliminal unease that master film composers can create, as unsung as they may be.

School of Music News
END_OF_DOCUMENT_TOKEN_TO_BE_REPLACED
School of Music Calendar
Why KU
Apply »
Music students present hundreds of public concerts every year
Students perform in KU choirs, concert bands, pep bands, ensembles, symphony orchestra, and jazz combos
The school owns one of the greatest jazz record collections in the world
KU Wind Ensemble performed the world premiere of the symphony "In the Shadow of No Towers" at Carnegie Hall
One of 34 U.S. public institutions in the prestigious Association of American Universities
44 nationally ranked graduate programs.
—U.S. News & World Report
Top 50 nationwide for size of library collection.
—ALA