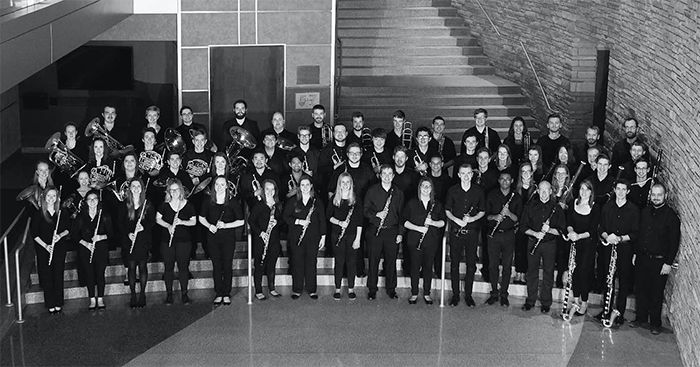 LAWRENCE – Selected as one of the best college bands in the country, the University of Kansas Wind Ensemble will perform at the College Band Directors National Association biennial conference March 15 at the Kauffman Center for Performing Arts.

The 71-member KU Wind Ensemble, led by Paul Popiel, and eight other top-rated collegiate bands from across the country will perform throughout the four-day event March 15-18 in Kansas City, Missouri. The nine bands were selected through a highly competitive, blind audition process where schools from around the country submitted recordings of their live concerts.

“This is among the highest honors a college concert band can receive,” said Popiel, director of bands at the KU School of Music. “I’m thrilled our students have the opportunity to showcase the great things happening in the KU School of Music alongside some of the country’s best college bands.”

The KU Wind Ensemble is composed of the most skilled wind and percussion players at the university. This will be the first time the KU Wind Ensemble has played at the CBDNA national conference. Other wind ensemble highlights under Popiel’s direction include the 2013 Carnegie Hall debut for the world premiere of “In the Shadow of No Towers,” which received a glowing review in The New York Times. The ensemble also performed for President Obama’s address on KU’s campus in January 2015. Earlier this month, the wind ensemble released its sixth commercial album, “Of Shadow and Light,” on the Klavier label.

The March 15 performance will be a shared concert with West Texas A&M University Symphonic Band. The concert will start at 7 p.m. with the KU Wind Ensemble performing after intermission, at about 8:10 p.m. The program will begin with Aaron Perrine’s “A Glimpse of the Eternal,” conducted by Matthew O. Smith, associate director of bands. The wind ensemble will also perform Olivier Messiaen’s “La Ville d’en-haut,” featuring piano soloist and doctoral student Han Wang. Joel Puckett’s “Knells for Bonnie” will showcase soloist Sarah Frisof, professor of flute. The program will end with Mohammed Fairouz’s “In the Shadow of No Towers,” a piece commissioned for the wind ensemble by Reach Out Kansas Inc.

Tickets will be available to the public through the Kauffman Center box office.  For more information, go to kauffmancenter.org or call 816-994-7222.

The KU Wind Ensemble will perform a CBDNA-preview concert at 7:30 p.m. March 8 at the Lied Center of Kansas. For tickets and more information on that concert, go to lied.ku.edu or call 785-864-2787.

School of Music News
END_OF_DOCUMENT_TOKEN_TO_BE_REPLACED
School of Music Calendar
Why KU
Apply »
Music students present hundreds of public concerts every year
Students perform in KU choirs, concert bands, pep bands, ensembles, symphony orchestra, and jazz combos
The school owns one of the greatest jazz record collections in the world
KU Wind Ensemble performed the world premiere of the symphony "In the Shadow of No Towers" at Carnegie Hall
One of 34 U.S. public institutions in the prestigious Association of American Universities
44 nationally ranked graduate programs.
—U.S. News & World Report
Top 50 nationwide for size of library collection.
—ALA