LAWRENCE – The University of Kansas Jazz Ensemble I, directed by Dan Gailey, was selected as one of six collegiate big bands internationally to perform in the 49th annual Next Generation Jazz Festival this April. 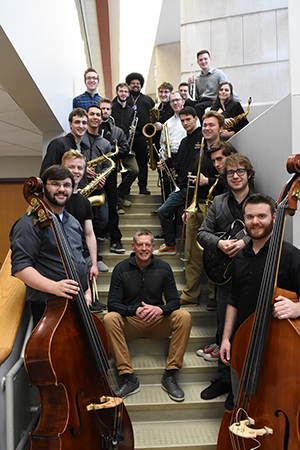 Presented by the Monterey Jazz Festival, the event, which runs from April 5 to 7, brings together more than 1,300 of the nation’s top middle school, high school and college student musicians. It features more than 100 big bands, combos, vocals ensembles, vocal soloists, conglomerate bands and special guests.

Finalists are selected through recorded auditions that are reviewed by a panel of nationally renowned jazz educators. The winning ensembles from each of the festival’s competitive divisions are invited to perform at the 62nd annual Monterey Jazz Festival in September.

“It is a great honor to once again be chosen as a finalist for this year’s Next Generation Jazz Festival. The festival is one of the most prestigious jazz education events in the world, and we are thrilled to represent the KU School of Music,” said Gailey, who is the director of jazz studies at KU.

The KU Jazz Ensemble I, directed by Gailey, is the flagship ensemble within the KU Jazz Studies Program. The ensemble first performed at the Next Generation Jazz Festival in 2017.

In July 2018, Jazz Ensemble I played 10 shows in 13 days as part of a European tour that included appearances by invitation at three of the world’s most prestigious jazz festivals – the Montreux Jazz Festival, Umbria Jazz and the Jazz À Vienne Festival. Jazz Ensemble I performed Gailey’s flamenco suite "Palos Nuevos" at the Kennedy Center for the Performing Arts in Washington, D.C., in April 2018. In April 2016, the ensemble performed at Jazz at Lincoln Center in New York City with internationally acclaimed vocalist Deborah Brown.

The program has received 25 DownBeat Student Music Awards, including Jazz Ensemble I’s 2015 award in the Graduate Division for Best College Big Band in the United States or Canada, and their Outstanding Performance Award in the same division in 2017.

School of Music News
END_OF_DOCUMENT_TOKEN_TO_BE_REPLACED
School of Music Calendar
Why KU
Apply »
Music students present hundreds of public concerts every year
Students perform in KU choirs, concert bands, pep bands, ensembles, symphony orchestra, and jazz combos
The school owns one of the greatest jazz record collections in the world
KU Wind Ensemble performed the world premiere of the symphony "In the Shadow of No Towers" at Carnegie Hall
One of 34 U.S. public institutions in the prestigious Association of American Universities
44 nationally ranked graduate programs.
—U.S. News & World Report
Top 50 nationwide for size of library collection.
—ALA