LAWRENCE — Professors at the University Kansas are among a group of researchers working to improve a new instrument that enables those with severe motion disabilities to play improvisational music. 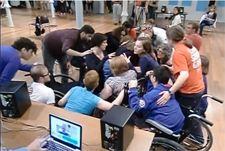 Known as Adaptive Use Musical Instruments (AUMI), the technology uses cameras in laptops, tablets and smart phones to track movement and gestures. The AUMI software maps a grid onto the screen, so if the user’s movement crosses a certain section, a musical note or sound is played. The motion can be as subtle as a raised eyebrow.

“The whole point is to help people who are severely motion disabled, but after working with this for a while, the whole notion of disabled is called into question,” said Kip Haaheim, an associate professor of music theory and music composition and one of the researchers involved in the project.

Pauline Oliveros, a well-known composer who was central in the development of electronic art music, developed the AUMI. She did so at the urging of New York occupational therapist Leaf Miller, who wanted a way for students who couldn’t hold a drumstick or hit a drum to participate in music sessions. 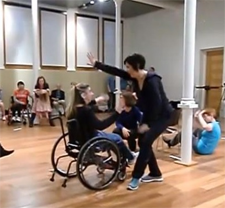 KU is one of six universities in the United States and Canada that participates in the AUMI Research Consortium, a group that finds ways to improve and better use the instrument.

Sherrie Tucker, an American Studies professor who specializes in improvisation, brought the research opportunity to KU. She pulled together an interdisciplinary group of scholars, which includes Haaheim as well as Michelle Heffner Hayes, dance professor; Nicole Hodges Persley, assistant theatre professor; and Pete Williams and Ray Mizumura-Pence, American studies lecturers. The group, known as the AUMI-KU InterArts, is focused on using multimedia, mixed-ability performance as research on community-building.

So far the group, which was funded through a KU Hall Center for Humanities seed grant, has held educational workshops to introduce the instrument to those in music therapy and special education. They also have used the AUMI in classes and held jam sessions with Independence Inc., a local independent living resource center for people with disabilities.

A year ago, AUMI-KU InterArts posted an open call for performers of all abilities, resulting in a public performance titled “(Un)Rolling the Boulder: Improvising New Communities” that brought together people with and without disabilities. Video of that performance can be found here. Members of Tucker’s graduate seminar “Theories of Embodiment” participated in the performance and created a final project based on it. Out of this emerged an open-access digitized oral history project by Liam Lair and Ashley Mog, doctoral students in women, gender and sexuality studies. Interviews of participants in the performance can be found here.

“Our goal was to use the AUMI in some meaningful way,” Haaheim said.

Based on that experience, Haaheim, Tucker and Williams presented on their research with the AUMI at the Guelph International Jazz Festival Colloquium held earlier this fall in Guelph, Canada. The group presented with Jesse Stewart, a Carleton University researcher from another AUMI research consortia who had used the AUMI in performances in Ottawa. The four are now working on a collaborative paper.

“We talked about how this kind of performance could envision new futures with new kinds of communities with people who don’t otherwise interact or imagine interacting with each other and what that performance would sound and look like,” Tucker said.

Williams shared his experience of what it was like to be part of the performance as an already accomplished bass musician.

Haaheim also discussed the need for organizers to make sure the performance was an event that enriched the participants. By having a performance, participants had extra motivation to practice the AUMI and develop their skills.

“Some of the people who the AUMI was written for can’t do anything in their life without help,” Haaheim said. “Providing them with an environment where they can have a rich experience seems to have some value in itself.”

School of Music News
END_OF_DOCUMENT_TOKEN_TO_BE_REPLACED
School of Music Calendar
Why KU
Apply »
Music students present hundreds of public concerts every year
Students perform in KU choirs, concert bands, pep bands, ensembles, symphony orchestra, and jazz combos
The school owns one of the greatest jazz record collections in the world
KU Wind Ensemble performed the world premiere of the symphony "In the Shadow of No Towers" at Carnegie Hall
One of 34 U.S. public institutions in the prestigious Association of American Universities
44 nationally ranked graduate programs.
—U.S. News & World Report
Top 50 nationwide for size of library collection.
—ALA